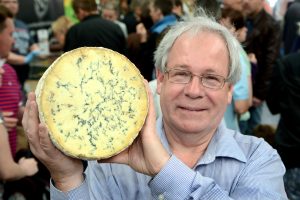 The Site Editor is Matthew O’Callaghan.  Matthew organises the Artisan Cheese Fair, the UK’s largest dedicated cheese fair with 9 – 10,000 visitors and around 70 cheesemakers  including Irish cheesemakers .

He also organises the Artisan Cheese Awards. and has been a judge at the World Cheese Awards and the Irish Cheese Awards. Other events he organises include The British Pie Awards, East Midlands Food Festival, ChocFest, PieFest & SpiritsFest.

Matthew taught cheesemaking to students in Costa Rica where he was Professor of Animal Sciences at the Institute for Tropical Agriculture (CATIE).  He was responsible for the revival of an old British Classic, Colwick Cheese, which he made while working in Brazil.  He passed the method on to a local Leicestershire dairy which Jamie Oliver subsequently featured on his food programme.

As a food historian Matthew has appeared in five series of the Great British Bake Off as well as on other TV programmes. He frequently gives talks on the History of Cheese.

Matthew is Chair of the UK Protected Food Names Association which he founded and which represents the 80+ UK food and drink names protected under EU law.  These represent some 25% of total UK food and drink exports and are worth some £6billion.

He has been a Leader of a Borough Council and a County Councillor. He has stood for Parliament in two UK General Elections. Sponsored by the Westminster Foundation Matthew ran workshops on Local Democracy for ex-guerilla leaders in Bosnia and El Salvador as part of the peace process after their Civil Wars had ended.

Matthew was awarded an OBE in the Queen’s Birthday Honours in 2015 for ‘Services to food industry and small businesses in Leicester’. It was presented by Prince Charles at Buckingham Palace.

Matthew has family in Counties Cork and Galway and an identical twin brother living in Strandhill, Co Sligo.