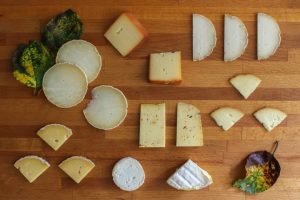 In France they boast that you can eat a different cheese every day of the year. If you include flavoured cheeses, then the 500 or so cheeses made in Ireland should be sufficient to keep any Turophile (cheese lover) going for almost a year and a half.

The Cheese Directory lists around 500 of the cheeses produced in Ireland – there will be inevitably be a few more that were not captured by the survey.  The list comes in two formats; a PDF file and an Excel file.  The list contains the names of all the cheeses each cheesemaker produces.  The information on each individual cheese includes the type of animal milk, the process used to make the cheese eg raw/pasteurised milk, vegetarian or traditional (animal) rennet, any rind treatment (washed rind, bloomed rind etc), if organic or not, the age of the cheese before it is sold, style of cheese and the weight of the cheese that can be bought.

The Excel file can be used to search the database of cheeses.  For example you can view all the cheeses produced by an individual cheesemaker, or search for a named cheese or to look for a cheese based on several of its characteristics eg style, type of milk, texture, vegetarian etc. A gouda from goats milk might be one such search or the search for an organic, vegetarian, smoked cheddar for another.

Both files can be downloaded here.

Ireland produces some great cheddars (eg Hegarty’s and Mount Leinster) and also a fair amount of Gouda some of which have won significant awards (Coolea – Cows milk) and Killeen (Goats Milk).  The list of the 500, or so, cheeses include British Regional styles as well as Dutch, French, Swiss and Italian style cheeses.  More recently they now include typical Venezuelan (Sabanero) and Brazilian (Minas) style cheeses. Blue cheeses have come of age since Cashel launched the first significant blue cheese in Ireland. The Irish like soft cheeses just as much as hard and the list of cheeses reflect this ranging in texture from soft, semi-soft, semi-hard, hard to the almost parmesan-like Kilnalahan Extra Mature from Kylemore Farmhouse Cheese.

As expected cow’s milk cheese dominates (72%) but there are a significant number of cheeses (17%) from the 23 goat’s cheese producers which include St Tola and Ardsallagh best known for their soft cheeses and Killeen for its Gouda harder cheese style.  Modern cheese making practices, eg separating the male from the females have eliminated the strong goaty flavour that dominated past soft goats cheese.  Sheep’s milk cheeses (11%) from the Island’s 12 producers often follow continental styles. And don’t forget the Buffalo cheese which curiously centres on Macroom and Co Cork.

Most cheeses are vegetarian (60%), which are more common the fresher the cheese.  Vegetarian rennet can give a bitter taste in some aged cheeses. A more recent trend is the increase in the number of cheeses made from raw milk (25%); sadly almost discouraged in countries such as the USA and Australia. Organic cheese account for only 1% of cheeses produced.  Pungent washed-rind cheeses are becoming more popular, those of West Cork; Milleen, Gubbeen and Durrus, have a world-wide reputation and were said to have been the start of the Farmhouse Cheese revolution in Ireland in the mid 1970’s.

Though frowned on by the purists, many Irish love a bit of something in their cheese; of course there’s porter, whiskey and wine; but what about apricots & almond, bee pollen, Fenugreek, Dillisk (uniquely Irish – eg Carrigaline Cheese) and the more expensive truffle cheeses?  Flavoured cheeses account for 23% of cheeses produced with smoked cheeses at another 5%.